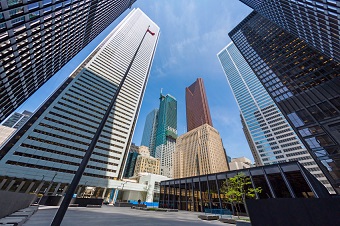 The Bank of Canada left its trend-setting interest rate unchanged at 1.75% on Wednesday as the sharp decline in oil prices temporarily dims its economic outlook for the coming months.

Before long, however, the central bank expects the economy to expand with renewed vigour. More rate hikes, it stressed, will be necessary “over time”.

In its first policy announcement of 2019, the bank said the recent drop in crude prices will result in slower-than-expected growth in an economy that has otherwise been performing well.

The bank is now projecting growth to be just 1.7% in 2019, down from its October forecast of 2.1% – but it remains optimistic the economy will begin to strengthen again as early as the second quarter of this year.

“The drop in global oil prices has a material impact on the Canadian outlook, resulting in lower terms of trade and national income,” the bank said in a statement.

“Looking ahead, exports and non-energy investment are projected to grow solidly… Indicators of demand should start to show renewed momentum in early 2019, leading to above-potential growth of 2.1 per cent in 2020.”

The business-investment lift, the bank said, will get a boost from Ottawa’s recently announced tax changes to allow companies to write off a bigger share of the cost of new assets in the year they are purchased.

The big question, however, is what this will all mean for the pace of future interest-rate hikes.

Governor Stephen Poloz has been gradually raising the rate since mid-2017 to keep inflation from rising too high.

The timing of its next hike will depend on several factors, the bank said, and there will be a particular focus on developments in the oil markets, the Canadian housing sector and global trade policy.

The Bank of Canada has estimated it will no longer need to raise the rate once it reaches a “neutral” level of between 2.5 and 3.5%.

“Governing council continues to judge that the policy interest rate will need to rise over time into a neutral range to achieve the inflation target,” the bank said.

In addition to the oil slump, consumption and housing investment were underlined as weaker than expected in large part due to higher borrowing costs and stricter mortgage guidelines. But household spending is expected to continue to be supported by other factors, the bank said in its latest monetary policy report, also released Wednesday.

It also pointed to several areas of uncertainty – the persistence of the crude-price drop, the extent of its impact on non-oil-producing regions, how household spending adjusts to previous interest-rate hikes and tighter montage rules, and global trade developments such as the U.S.-China conflict.

Canada’s sharp deceleration in wage growth since last spring has also been highlighted by experts as a concern for the economy – particularly since the tightened labour market should translate into higher wages.

The bank addressed the issue on Wednesday by saying national wage-growth figures have been weighed down by weaker numbers in the oil-producing provinces. The rest of the country has shown a steady level of wage growth in recent years and the bank remains hopeful it will pick up its pace.

The bank estimates the oil slump, which began last summer and has seen prices recover in recent weeks, will reduce the level of Canada’s gross domestic product by 0.5% by the end of 2020. The economic impact of the decline is expected to be about one-quarter as large as the 2014-16 oil-price shock, the bank said.